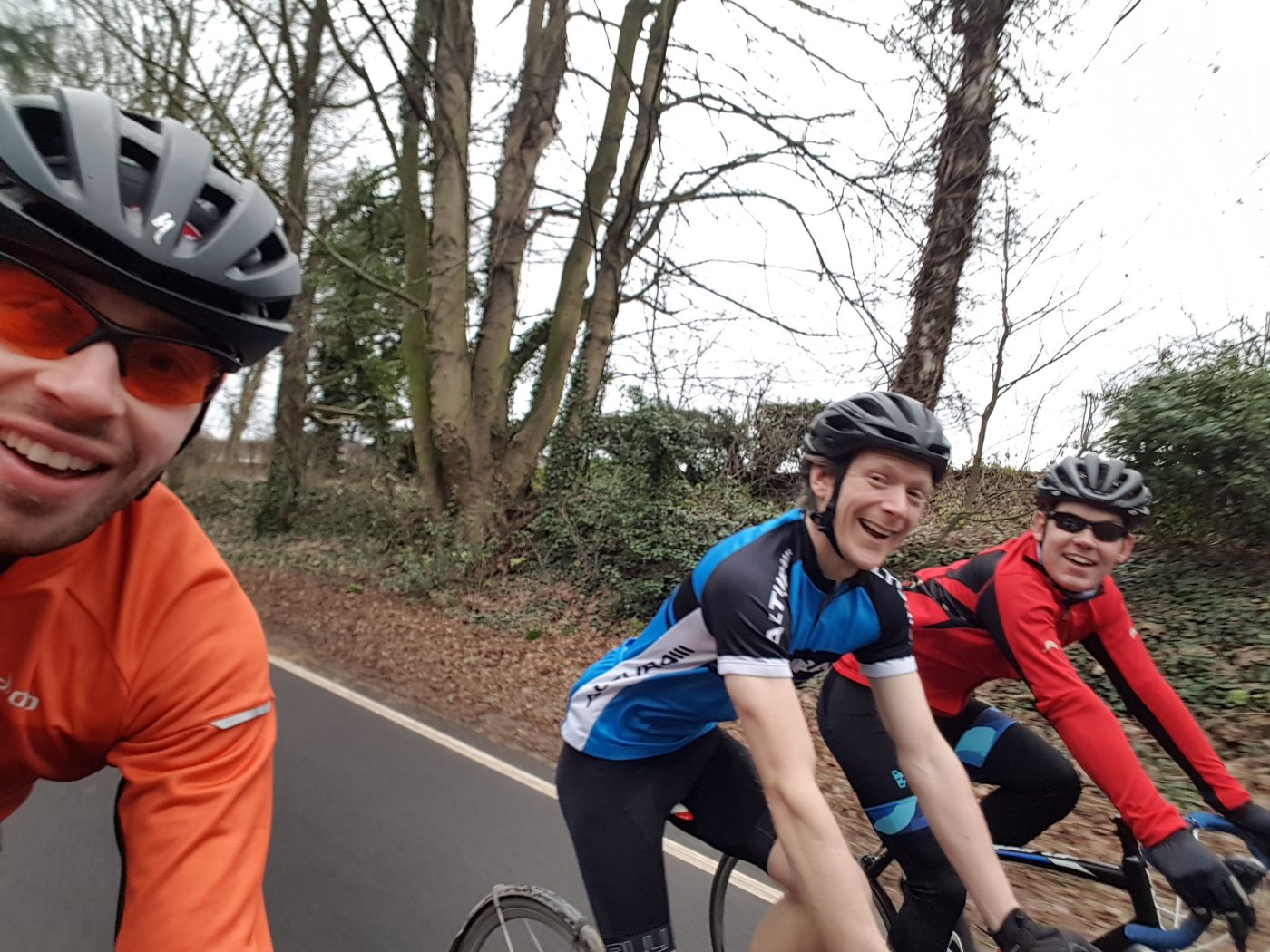 And then there were three of us. I’ve been trying to get Josh, my brother-in-law, to come out for a ride with myself and Will for a while. Josh and I usually go mountain biking but he also has a road bike which he uses for commuting.

The starting point was my house and we all met ready-ish to ride around lunch time. This first thing that was apparent was the amount of kit Josh was wearing, or should I say lack of it. Yes, he was cycling in winter in just a jersey and a pair of shorts. This either made Josh look mad or Will and I look like wimps. Either way, we all immediately started laughing. Good start to a ride.

We headed off, well, when I say we… Josh turned back around to go and pump his tyres up. Attempt number two, all three of us now setting off. We had a rough idea of where going but didn’t have an exact route in mind. We just made it up as we went along. Definitely good to keep us on our toes. Plus Will hadn’t been out on the bike for a while.

The miles very quickly whizzed by, the conversation and laughter were flowing and we were all enjoying a pleasant winter ride, as well as each others company.

We headed towards the river, one of our favourite places to ride. Some lovely quiet roads and some very picturesque scenery. It certainly makes a change from staring at the walls of the house while riding on the rollers.

For the start of the ride, the wind was clearly behind us. Not that we were complaining, it made the first few miles a lot easier. Cycling along the river, we decided that we would head into Thurgaton and towards Bleasby. We didn’t plan on going much further but we did decide that we’d attempt at least one hill. It was good to dust the cobwebs off the hill climbing muscles.

Once we got to the top, we started to head back home. The worst bit was along the busy main road which is reasonably flat and open to the elements. Mainly, the wind.  Still, with there being three of us, we took it in turns to bear the brunt of the headwind and soon after turned off towards Epperstone.

Cycling back along roads that were a lot quieter and a bit more sheltered. Our conversation started again and before we knew it we weren’t that far away from home.

Initially, we’d planned to do around 15 miles. Once we got back, we had covered about 21. Clearly, we were feeling better than we thought and enjoyed each other company. Josh even said it wasn’t as bad as he was expecting and that he enjoyed the road ride. We’re already talking about organising another ride.

Where have you been riding this weekend?

10 thoughts on “The Weekend Ride: Calverton”